After returning from a convenient and luxury laden few days on this gorgeous island I can find few downsides.

First of all, the flight to the capital Mahon is around two hours – less time than it takes to fly to many of the Spanish mainland destinations and flights depart from many regional airports, making it an ideal long weekend break.

As Menorca is only 30 miles by 10 miles, sightseeing and discovering all that the island has to offer is easy, and driving on very quiet roads is not a scary proposition for hire car novices.

The airport is modern, efficient and not as crowded as some mainland hubs.

But a definite highlight was the discovery of a stunning hotel that is just a 10-minute drive from the airport in an unrivalled location at the mouth of the island’s natural harbour – the biggest in the Med and the second largest in the world. This was one of many fascinating facts about the island I learned during my stay and there were lots more surprising stories to come, not least Britain’s own occupation of the strategically important island in the 18th century.

Barcelo Hamilton is an adults-only (over 17s only), urban beach hotel, a bonus for those looking for a quiet getaway, with all the facilities you can want for a rejuvenating break. It’s a Brit favourite. The provision of a ‘proper’ kettle to make tea in the room is a big tick from me! 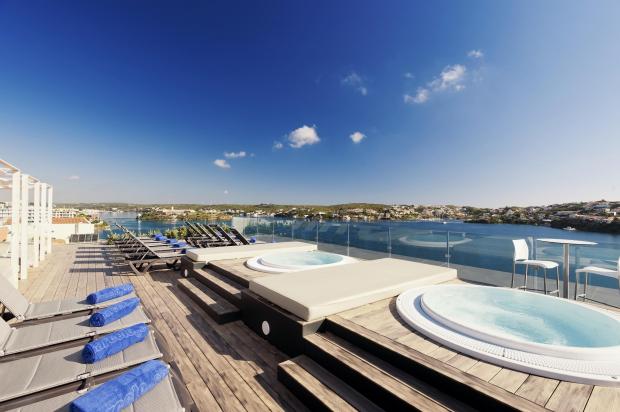 The hotel stands right on the water and I found lounging on my room’s balcony in the morning and the evening just watching the many vessels, large and small make their way to and from the port of Mahon fascinating. It’s the most easterly point of Spain and therefore the first to see the sunrise in the morning.

Our drive there from the airport took us through the narrow streets of Es Castell, all radiating from what was once a military parade ground and still surrounded by the former barracks buildings. It’s an easy walk from the hotel to the village’s cafes and small shops.

It was hard however to drag myself away from the hotel’s delights. With two pools on the ground floor and six jacuzzis on the amazing roof terrace there were plenty of places to cool off from a stint of sunbathing. 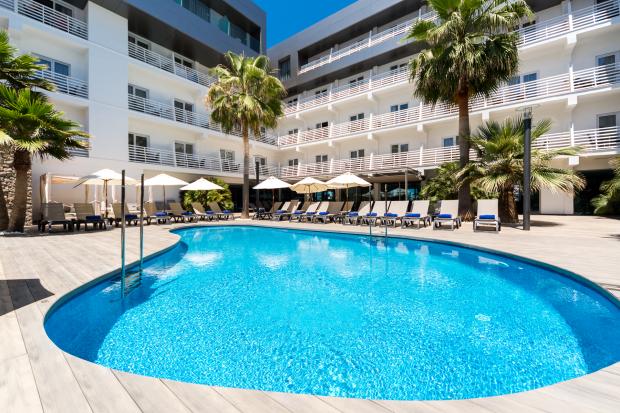 My most taxing decision was choosing a good spot for taking in the rays as I waited for my favourite tipple to be brought over from the Blue Sky Bar. Try the Menorcan speciality of pomada – a blend of local gin, originally made by the British, with lemonade which is deliciously refreshing.

The room-for-two Balinese beds are made for an ultimate luxury lounging experience.

At night it has a different kind of beauty with coloured lights enhancing the atmosphere and DJ sessions for party lovers.

The in-house spa offers a wide range of treatments and my head, neck and back massage was a delight. There’s a sauna and hammam (steam bath) and double treatment rooms for couples as well as a fitness centre.

The Sa Cuina restaurant within the hotel offers buffet-style breakfasts, lunches and dinners and there’s a big choice. But I particularly loved the more intimate, waterside Sa Cova restaurant with its a la carte menu specialising in seafood and local cuisine washed down with some fine wines, including offerings from the nearby Binifadet winery.

I particularly loved the chef’s lobster stew, Andalusian style calamari with wasabi aioli and the suckling pig. This is a special treat with a typical meal with wine costing around 40 Euros (£35) per person.

Following dinner head up to the Sky Bar or the Es Mirador Lobby Bar for a cocktail and to enjoy some live music. 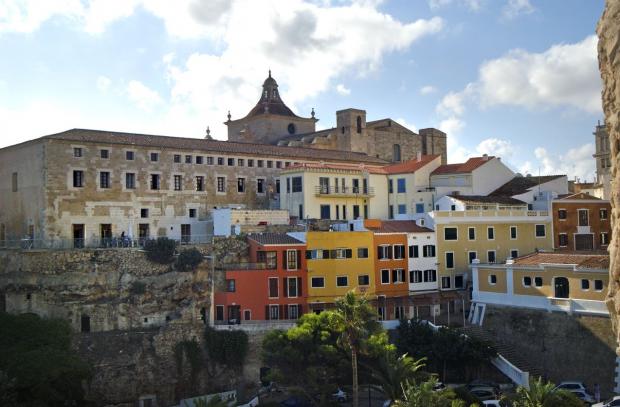 Getting into Mahon itself couldn’t be easier or more relaxing. You can drive, of course, but I found hiring a private water taxi from the tiny harbour of Cales Fonts, a few minutes’ walk from the hotel fun and relaxing too. You can be dropped off at the harbour side near the centre of town, although there are quite a few steps to climb before getting to main street level at the Placa del Carme. I was assured a lift is being built at some time soon.

The city is a compact and pretty delight. Taking a walking tour is the best way to see it and learn about its history. There is a great deal of evidence of the British occupation with elegant townhouses with sash windows. I was particularly intrigued by the fact that many of the shutters were painted dark green together with the use of dark red paint on doors and frames. It was explained that these were the colours used on the naval ships of the time and the townsfolk used up what paint was left over. The tradition has remained and looks stunning.

The cloisters alongside Carme church house a great market and arcade of shops where you can bag some typical Menorcan buys including Mahon cheese, gin and even a pair of the now world-famous former peasant sandals known as abarcas, at around 25 Euros (£20) – a lot less than Stella McCartney’s designer versions. There is also a central avenue of shops where you can browse and buy into the night.

This is where I met a remarkable (and tiny) woman Maria Caimaris, aged 57, who runs her own fruit and veg stall, but on her time off doubles as the island’s slingshot champion. Once the skill of fierce warriors who fended off enemies of the islanders, it is now a sport.

Nearby, in what is part of the city’s fish market, fascinating in itself, there are a range of tapas bars with a mouth-watering and, at times, bewildering array of choices, a great place to have lunch.

Menorca is famous for its cheese, and you can binge on that as it’s delicious, but there’s fish, meat and sweet treats too – even mini cones of battered fish and chips if you really must keep your British hat on.

For a welcome respite from the Mediterranean sunshine and for a fascinating insight into the island’s long history, including its Roman and Moorish influences, the Museum de Menorca, housed in a beautiful former 17th century monastery, is a calm delight.

But the sea always seems to be drawing you back from this city on the hill and an ideal way to explore the harbour itself is on a boat trip. I chose an excursion on the glass-bottomed Yellow Catamaran with a commentary that gives you many historical facts before discovering what the underwater depths have to show.

The water taxi took me back towards my hotel passing some gorgeous yachts along the way.

But if you ever do leave the hotel, try these outings from the hotel…

Menorca has 46 beaches and the island itself is designated a Biosphere Reserve by UNESCO for its great balance of nature to tourism. There are some beautiful sandy beaches on the south coast, some of which are pristine and secluded. One of the best with facilities for tourists who like that kind of thing is Cala Galdana. The secluded bay has crystal clear waters off a sandy beach, very safe for children and with facilities providing everything you’d need for a day in the sun but without feeling too touristy.

This small vineyard, opened to the public in 2014, is a great place to while away a couple of hours on a tour and a meal on the charming vine covered patio. It’s family-run and began as a project to make wine for the Angles family. It grew from there and now exports around the world. There is red, white, rose and sparkling wine. You can learn about the wine processes and take tastings during a very pleasant stay. binifadet.com

To round off your evening after your fill of local wine travel a short distance to a spectacular location on the south coast to watch the sun go down. Cova d’en Xoroi is a very popular entertainment destination in Cala en Porter, a resort popular with Brit holidaymakers. This amazing cave and cliff-face terraces linked by hundreds of steps is a jaw dropping, not to mention breath sapping experience. Listen to music and sup your favourite cocktail as you watch the sun go down to the sound of a live band. covadenxoroi.com

No trip abroad is complete without a shopping blowout and this shoe shop extraordinaire doesn’t disappoint. It’s the home of the internationally famous Pretty Ballerinas brand of pumps, a favourite of Kate Moss. You can bag some bargain luxury hand-made shoes including their own take on the traditional abarcas sandals in all colours imaginable, children’s shoes, handbags, accessories and leather jackets. www.mascaro.com

This charming harbour and fishing village on the north coast is a great place for a leisurely lunch of super fresh seafood and a browse around charming individual shops. Most of the restaurants have a direct view of the water and it has an unhurried, exclusive atmosphere.

The UK’s coronavirus hospital death toll has increased by 1,185 – the biggest single-day jump of the entire pandemic. Hillingdon Times | News …

Prior to Graham Taylor’s golden era at Vicarage Road, only one man had led Watford into the second tier of the Football League in the club’s history. Hillingdon Times | News …

A tree preservation order has been served on a golf course which has been mooted as a potential site for a football stadium. Hillingdon Times | News …

Small businesses in Ealing have expressed concern regarding the impact of the Brexit deal. Hillingdon Times | News …

Labour’s deputy leader Angela Rayner has said she is “deeply concerned” that the Liberal Democrats are continuing to send out political leaflets despite lockdown guidelines. Hillingdon Times | News …