Be afraid, be very afraid. Universal’s Halloween Horror Nights are under way in Florida and set to be the scariest, goriest, most blood curdling experiences in the more than 25 years since the event’s inception.

There is also a distinctly 80s vibe to many of the haunted houses and scare zones around Universal’s parks this year which are totally transformed from day to terrifying night over the Halloween period until November 3.

For the first time ever Universal is partnering with Netflix to bring ‘Stranger Things’ to life at its Halloween Horror Nights events. Each park will feature its very own maze that will give guests the chance to brave the Upside Down and encounter iconic scenes, characters and environments from season one of the critically-acclaimed series. Guests can experience the Byers’ living room adorned with an erratic display of flashing Christmas lights, Hawkins National Laboratory in the Upside Down, Will’s makeshift fort called Castle Byers and more. 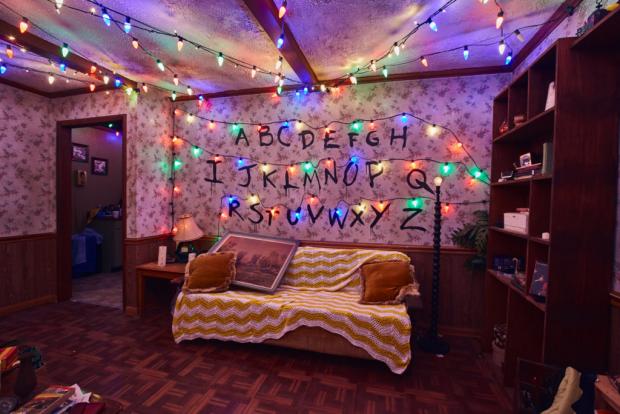 For those who are brave enough there’s also a chance to come “into the light” as part of the iconic supernatural MGM horror film, Poltergeist. Bringing this experience to Universal has been a long-held ambition of Horror Nights’ creators and news of the coup was withheld to the last minute to build up the fan frenzy. Directed by Tobe Hooper and produced by Steven Spielberg, Poltergeist, premiered in 1982, is thought to be one of the scariest films of all time. In the Poltergeist mazes guests step into some of its most iconic scenes and encounter memorable characters of the film that have spawned many nightmares over the years.

The mazes will lure guests to the Freeling family house built over a cemetery where malicious ghosts threaten the lives above. From the underground graveyard to ghostly apparitions, guests will come face to face with infamous scenes from the film including the iconic flickering TV screen, menacing Beast from beyond and pool filled with floating corpses. As guests cross into the ‘light,’ they will find themselves surrounded by a surreal landscape of vanishing walls, floating furniture and a creepy clown with a menacing smile. In a rush against time, guests will be forced to make it back to the world of the living or forever be trapped…

Walking through these mazes and scare zones is like finding yourself on a genuine Universal film set. The level of experience is truly phenomenal. Even the food is scarily themed. There are 1,000 scareactors to put you in the scream zone. Creatures jump out at you with chain saws from the bushes, zombies stalk you on the street and vampires lust after your blood. What’s not to love about this amazing spectacle?

Halloween 4: The Return of Michael Myers

Evil has returned in an all-new house. The infamous Michael Myers has escaped, and he’s out for blood. Wherever you turn, he’s moving in for the kill, ‘til your heart is screaming out of your chest. Your only hope is Dr Loomis, Myers’ fire-scarred former psychiatrist, but will he get there in time? This masked maniac is unstoppable, and there’s nowhere to hide.

The haunted minds behind Happy Death Day and The First Purge have spawned another horror house. Your shock shifts to alarm as you go from a campy thriller to a brutal world. It’s the last day of the rest of your life as you witness a college student try to break a murderous cycle. Then enter the testing ground for a barbaric experiment, where all crime is legal for twelve hours. Will you live to see tomorrow?

It’s Trick ‘r Treat time. In this maze you have play by the rules or pay the ultimate price. Your dread will grow as Sam, the vengeful trick-or-treater, waits for the moment he can treat rule-breakers to his favorite Halloween surprises: razor lollipops and sweet revenge. As you find your way through the five twisted stories of Trick ‘r Treat, you’ll recoil in terror when you witness the fate of those who didn’t honor the tradition. Don’t be caught dead breaking the rules.

The world doesn’t get any darker. The planet has been infected with the ultimate pandemic. A ghoulish biological outbreak is turning swaths of humanity into a plague of vicious, swarming zombies. In a flash, you’re lost in darkness—but the zombies can still see you, and soon your growing unease will turn to screams and despair. If you’re not already afraid of the dark, you will be.

The caramel-coated carnivals of yesteryear have long died, but something sinister has festered within the decay, waiting to torment trespassers. Enter a dilapidated salvage yard, a maze of rides, games and carnival parts tainted with rust and blood. Gleefully vicious performers stalk you from the shadows as your panic rises. You’ll be overwhelmed with disgust and terror as you encounter gory games a-plenty, brutal automatons that ensnare you and a grotesque tunnel of love. You’re in for a show-stopper.

It’s showtime at the local drive-in, where you don’t just catch a movie; the movie catches you. Fear flickers on the screen, filling you with a mixture of dread and delight. As each 80s B movie screams to life, you’ll shriek with terror as you try to escape werewolf bikers, alien cannibals and a ravenous swamp yeti. When the credits roll, heads roll.

Humanity is extinct, wiped out by a cataclysmic meteor. In its wake, something monstrous has taken root. You’ll be unnerved by familiar sights that have been overtaken by invasive vegetation. But soon your horror will ripen as you realize these plants are predatory, and you’re easy pickings. Fear is fertile in this gruesome garden.

The realm of the fairies was once peaceful, but the Wicked Witch of the West has seized control and afflicted the land with a dreadful curse, twisting beloved fairytales beyond recognition. You’ll shudder as you discover the horrific new reality of the stories you thought you knew. There are no fairytale endings here.

Chucky, the world’s deadliest doll, is back for more after 30 years of mayhem. Chucky has brought a toy fair to gruesome life on the streets of Hollywood and twisted your favorite childhood toys into nightmares. You’ll be dying to play.

An interstellar circus tent has landed and a madcap invasion has begun on South Street. Step right up to the big top, where the sweet smell of cotton candy delights you. You soon realize this grotesque treat is not spun with sugar but from victims like you. Otherworldly clowns giggle madly as they zap people into cotton candy pods with ray guns and devour every grisly strand. At this circus of fear, the joke’s always on you.

It’s December 31, 1984. As the ball drops in New York City, this New Year’s Eve bash is about to bite. Literally. A blood-sucking DJ counts down the biggest hits of the 80s as fanged punks, big-haired blood-suckers and lace-gloved vampires hunt down partygoers. The howl of synthesisers masks your growing screams. When this year ends, so will you.

An ancient evil has been reawakened in Central Park and transformed Halloween into an abomination. Vines coil like vipers around iron fences. Rotting pumpkins molder upon the cursed ground. You’re horrified to discover the larger ones hold human victims whose decayed flesh has mingled with pumpkin guts. You cringe in horror, but the worst is yet to come. Beings of blood and vine seek out human sacrifices. And you’re ripe for the taking.

An old barn is the setting of every kind of horror, its walls decorated with objects from each house. Pose at this foreboding photo op along the Avenue of the Stars, but be wary. This barn is not as abandoned as it seems. Foul creatures lurk between the hay bales, ready for a harvest of flesh. Will you survive the reaping?

With a wicked mix of dance, acrobatics and theatrics, Academy of Villains is back with an all-new performance. Prepare for maximum overload in this test of humanity versus technology. Set in a dark and distant city of the future, Academy of Villains hack into a world of pounding synths and neon lights.

Enjoy seven nights at Universal Orlando Resort with Virgin Holidays, including scheduled Virgin Atlantic flights from London Gatwick direct to Orlando, with accommodation at Universal’s Aventura Hotel from £1165pp. The price is for two adults and is based on a Skyline view room on a room-only basis with car hire included. The package includes a 3 Park Bonus Ticket for access to Universal Studios Florida, Universal’s Islands of Adventure and Universal’s Volcano Bay AND the Halloween Horror Nights Frequent Fear Plus Pass Ticket – offering multiple nights of admission until November 3.

To book, call 0344 557 3859 or visit one of our individual retail stores or one of the 110 stores located in Debenhams and Next stores nationwide or visit virginholidays.com

An additional 100,000 Londoners could be “plunged into poverty” without further support from the Government, according to new research. Hillingdon Times | News …

Mayor of London Sadiq Khan is being urged to trial a public register of fire risk assessments in London to provide more clarity to new renters and owners in the wake of the Grenfell tragedy. Hillingdon Times | News …

A woman who is both deaf and blind and has shielded since the start of the pandemic has opened up about her “overwhelming sense of isolation”. Hillingdon Times | News …

The parents of a newborn baby who died aged just three days old called 111 three times before an ambulance was sent – and were given incorrect resuscitation advice, an inquest heard. Hillingdon Times | News …

As Boris Johnson prepares to set out his roadmap for the national easing of lockdown restrictions, London’s business leaders have identified how they want to see the capital emerge. Hillingdon Times | News …