When the founder of Hotel Formentor on the northern tip of Majorca picked his spot for construction he knew what he was doing.

While then in the 1920s it was rather barren, the outlook was, as it is now, one of the most beautiful and spectacular on the island. As an arts patron Adan Diehl had a vision to create a haven for artists, writers and performers of the day – a place they could come and be inspired as well as relax and exchange ideas. 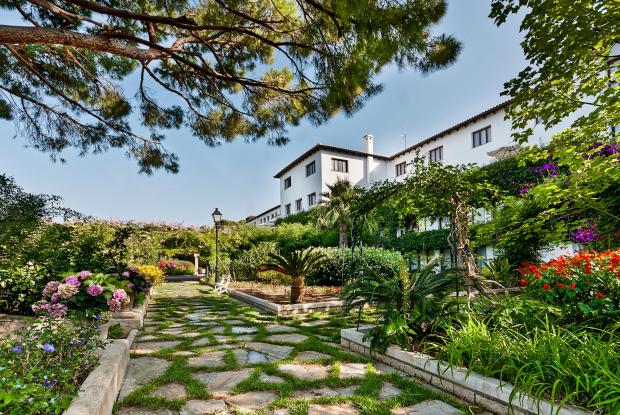 But construction was not easy as the site can only be reached by steep winding roads through the spectacular Sierra de Tramuntana, a UNESCO World Heritage Site. This is along a road, about an hour’s drive from the capital Palma, with many hairpin bends and jaw-dropping views to amaze along the way. Some of the materials were also brought in by boat from nearby Port de Pollenca.

Now, in all its original beauty and surrounded by 3,000 acres of exquisite grounds I admit The Formentor is one of my favourite hotels.

As if the sea view from my exquisite room is not enough romance for me, looking through the Hotel Formentor’s plush coffee table book about its history lays out its Romantic beginnings with a capital R. 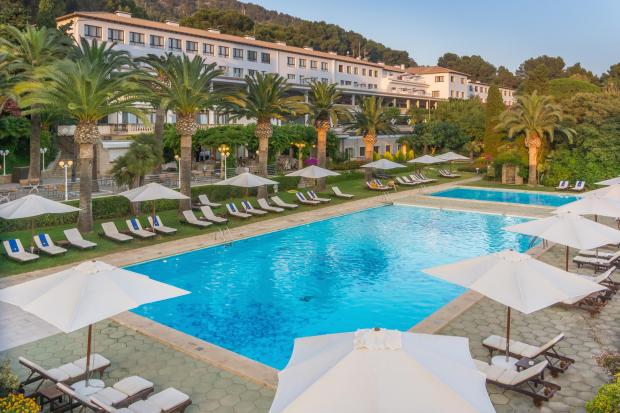 The rich, famous and even royal guests over the years have included Charlie Chaplin, Agatha Christie, Winston Churchill and the Spanish king and queen. Grace Kelly and Prince Rainier honeymooned at the Formentor and a special suite is now named after her. Peter Ustinov, who filmed Evil Under The Sun in the area was a frequent visitor. On a tour of discovery of the hotel I found a fascinating corridor with some amazing cuttings and photographs of the hotel’s early days and its distinguished guests, although Charlie Chaplin, resplendent in his bathing dressing gown, doesn’t look too happy at being snapped on holiday!

Even today a connection with the arts remains with the annual Formentor Sunset Classics open-air concerts that have attracted artists such as Dame Kiri te Kanawa, Daniel Barenboim and Lang Lang. This is a truly spectacular and glamorous event held in a magical setting and worth booking early for as tickets go fast.

Music royalty of a different kind, including Lionel Richie have also performed at the hotel and Mick Jagger has stayed here too.

This mountainous area attracts cyclists from around the world, a group of US enthusiasts were staying at the Formentor, and you can join them if you have the energy. Indeed there are many activities you can book here, including a guided trek off the beaten track around the rugged coast. There is a popular lookout point near the hotel – Mirador Colomer. If you don’t like heights though it’s not for you, but a great place to really appreciate the landscape.

The current owners, Spanish hotel group Barcelo, has thankfully paid great attention to the Formentor’s history while adding the luxury facilities and service that 5 star guests expect. It forms part of the group’s Royal Hideaway collection of top hotels. Staying here doesn’t feel like you are in a generic chain hotel, but more like being in a luxury mansion with just a few other select guests. In fact, there are 122 bedrooms and suites. If you really want to feel you are the only ones enjoying this luscious location there are six villas in the hotel grounds to choose from.

While my intrepid, and younger, female companions donned walking gear and set off exploring this area on an organised trek during one day of our weekend away, I felt that enjoying the hotel’s beautiful surroundings was a more attractive option for me. There are two outdoor pools, tennis courts, mini golf on site and golf courses within easy access.

But the beach is just an easy stroll through the lush gardens where two of the hotel’s four restaurants offer everything from pizzas and burgers to a full-blown, laid-back lunch of paella washed down with the tipple of your choice. Eating here stretches well into the afternoon as it’s such a pleasurable experience.

It’s a small public beach but you can hire comfy loungers serviced by the hotel with towels and umbrellas where you can enjoy some quiet moments. The sea is sparklingly clear and a delight to swim in.

If you want to stay nearer the hotel then the new, indulgent Balinese cabins next to the pools are pure indulgence. They each have a double bed, changing room, shower, robes, towels, sun loungers and even a TV. I also enjoyed a massage there so you can just drift off into an afternoon nap having been totally destressed. Sheer bliss.

But at some point you have to explore this stunning bay and one of the best ways to do this is on board a beautiful, traditional, wooden Majorcan fishing boat trip. Our captain Dania even served our small group his home-made wine with cheese and biscuits after we’d snorkelled and swam around the rocky coast spotting fish and sea life under the surface.

Another daytime outing to a family-run, artisan textile company Teixits Vicens, established 160 years ago was fascinating. We were given an insight into an ancient art as we watched the handmade linen/cotton cloth being made in many different designs. In the shop you can buy anything from cushions, to bags to deck chairs in the bright and bold  Mediterranean colours, www.teixitsvicens.com  Next on the agenda was a visit to another family business, this time an olive oil producer. Solivella, which offers tours and tastings,  produces several different flavours from its crops and exports around the world, www.olisolivellas.com

But it’s the hotel itself and dining beside its many spectacular views that are the true stars of being at Cap Formentor. Enjoy your pick from a huge array of breakfast, lunch or dinner choices at the buffet then enjoy your meal on the hotel balcony at the El Colomer restaurant or choose an exquisite a la carte meal at El Pi under a romantic, flower-covered arbour next to the gorgeous gardens.

Choose from dishes made from local produce and vegetables from the hotel’s garden and, of course, fresh seafood.

Overall, the word that springs to mind in describing the Hotel Formentor is classy. Luxury without shouting about it. You get the feeling with a nightcap in the piano bar. So play it again (and again) Sam.

Rates at Royal Hideaway Formentor start from £197 (223 euros). Price based on two sharing on a complimentary B&B basis. For more information or to book please visit www.barcelo.com Norwegian serves Palma-Majorca year-round with up to six flights per week from London Gatwick on modern aircraft offering all passengers free Wi-Fi. Fares start from £29.90 one way / £62.50 return at www.norwegian.com/UK or dial 0330 828 0854 (opt. 1)