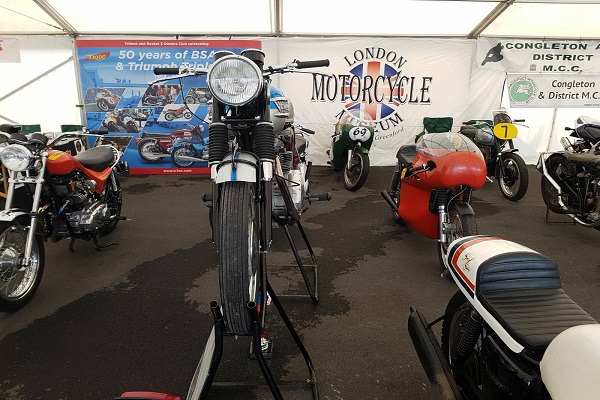 The London Motorcycle museum is the capital's only motorcycle museum, opening in 1999 with a display of around 60 exhibits and now have around 200 exhibits on display including a wide range of bikes & memorabilia as well as knowledgeable staff.

he London Motorcycle Museum - London’s only motorcycle museum - is the capital’s friendly focus for Britain’s biking history and heritage.

Not only do we have some 170 machines and other exhibits on permanent display – we have many more machines in reserve, plus staff with a wealth of knowledge, personal insights and stories!

Our ever-growing collection (see ‘Inventory’ for current details) includes a 1902 Ormonde (a past participant in the Pioneer Run), a Austin 7 engine housed in a Norton frame; a clutch of unique prototypes and ‘media stars’ which cannot be seen anywhere else; a barrel load of other British machines, including racers and road bikes from ABC to Zenith; the Crosby collection, including 50 Triumphs, the last Triumph T140 out of the Meriden gates in 1983 and a 1991 Norton rotary in Paramedic livery.

The London Motorcycle Museum isn’t just a great static display. Every year our bikes appear in shows and exhibitions across the country and abroad too!

We also have bikes that have starred in Eastenders, Dad’s Army, George and Mildred and Songs of Praise.

We regularly take machines to community events, county shows and carnivals as well as hosting our own special events and ride ins, on the museum premises.