Zoe Chasemore believes support from different coaches and mentors has been a crucial part of UK Sport’s High-Performance Coach Apprenticeship.

Chasemore, 45, has been a clerk in the British Army since she was 16 years old and her current role includes working on the elite shooting programme that the army run.

She was recently selected to join UK Sport’s High-Performance Coach Apprenticeship, which aims to help sports coaches evolve and bring the true best out of their potential.

Chasemore is learning under the tutelage of several experienced high-performance coaches as part of the programme and the Plymouth resident said:  “The whole learning experience has shown me how important getting information from other coaches, my peers and people with more experience than me is. 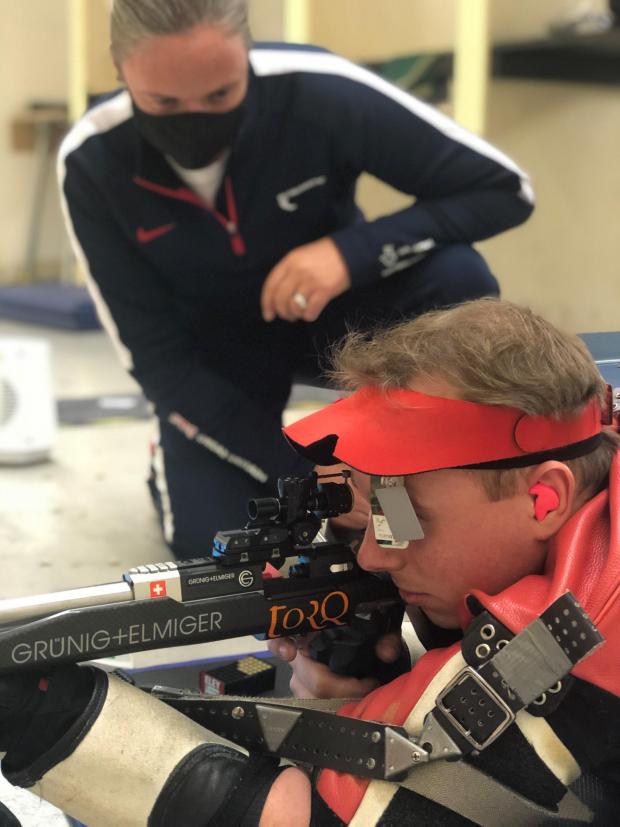 “I have my own coach developer as part of the apprenticeship, but I’ve also had lots of time with other coach developers so I’m getting loads of different input from difference sources.

“It’s excellent because you get to see things from so many different perspectives. Sometimes you can only see things from a certain perspective, so to have another four or five people giving you their opinions and experience means you learn much quicker.”

The programme aims to harness the power and platform of sporting success to drive change across wellbeing, diversity, inclusion, and sustainability.

Chasemore emphasised how inspirational working with other women can be and stressed the need to get more involved in high-performance environments.

So excited & privileged to be part of this trailblazing apprenticeship, working with amazing coaches from all different sports. 2 days of learning has flown by and can’t wait until the next learning set. Thanks @ShootingArmy @GBShooting @AgcSport @ArmySportASCB @uk_sport https://t.co/r1888H1ZVX pic.twitter.com/zMEH0oI951

She said: “I think it’s really important to have women coaches in sport and to have women in sport in general – especially when we make up such a low percentage of people getting involved.

“For a female to be able to look around and see that there’s another female voice there helping them in their development is a really good thing.

“I come from a military background, so I’m used to working in a male-dominated environment, but when ladies get together it can be quite an inspiring environment to be in and it’s important that they know it’s there if they need it.”

Alongside UK Sport’s Female Coaches Leadership Programme, UK Sport has launched a brand-new High-Performance Coach Apprenticeship (HiCAP) having played a trailblazing role in the creation of the first ever sports coach apprenticeship in the UK, leading the world in support of developing expert high-performance coaches.

A NORTHWOOD man is part of a group suing Mercedes over its role in the so-called Dieselgate scandal. Hillingdon Times | News …

Tabai Matson hopes Harlequins will continue their flying start to the new Gallagher Premiership Rugby campaign when they host Worcester Warriors in their home opener at the Stoop. Hillingdon Times | News …

OAK Wood School in Sutton Court Road, Hillingdon, is on its way to becoming officially rates as ‘good’, according to an Ofsted inspection. Hillingdon Times | News …

After what he described as living a ‘nightmare’ and looking like he had been ‘assaulted’ from a virus, TV presenter Eamonn Holmes has called for more awareness of shingles. Hillingdon Times | News …

Rugby fans all over England rejoiced last weekend as they were welcomed back to the stands for the opening round of Gallagher Premiership Rugby 2021-22. Hillingdon Times | News …